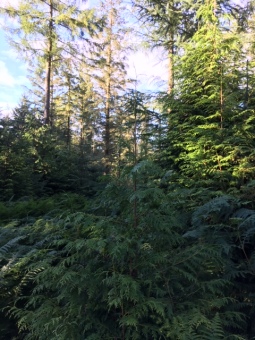 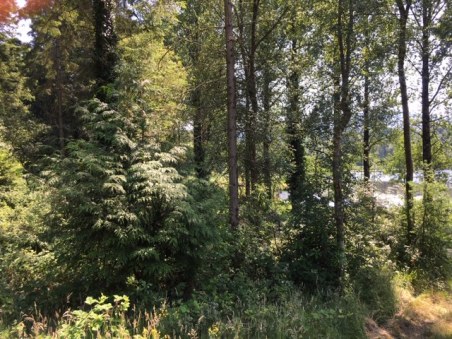 The woodlands at Baronscourt reveal a pioneering commitment to CCF by the owners, made almost 20 years ago at the first ever Pro Silva Ireland field day, and represent the most developed CCF-managed woodlands on the island of Ireland.

In September 2001, Baronscourt Estate started a management conversion of its forest to Continuous Cover Forestry (CCF) adopting graduated density thinning and target diameter regimes.  The aim of this conversion was to enhance the stability within the forest structure from wind, soil erosion, and for climate mitigation. In addition, a multi-age (uneven) and multi-species forest structure has significant economic,  environmental, and social benefits in comparison to standard plantation forestry. Natural regeneration is becoming well established, although the resident herd of Japanese Sika deer continue to browse some favoured species such as oak and Douglas fir. In 2003 the Estate was awarded the prestigious Royal Forestry Society’s Duke of Cornwall’s Award for their efforts toward forestry and conservation management.

The field day kicks off at 10.40am with coffee on a arrival, followed by a walk through an area under transformation. There will then be a break for a picnic lunch and the Pro Silva Ireland AGM (to be notified shortly). After lunch attendees will visit a Sitka Spruce stand which has been thinned twice by graduated density selection. Discussion will cover whole forest inventories (with a visit to a sample plot) and deer management strategy.

Participants should bring a packed lunch and be dressed for the outdoors.

As usual at Pro Silva Ireland field days we will be collecting a voluntary contribution (suggested as €20) towards the running of field days and other events.

CCF has the potential to deliver economic, environmental and social benefits like no other form of sustainable forestry. The science of CCF is rapidly developing to provide  foresters and woodland owners with the information required for best practice. As a…